Anthony Lagoon beyond the Black Stump

I have no idea what  my mother with three little children under 8 thought when my dad was posted to Anthony Lagoon a one man police station smack bang in the middle of the Barklay Tablelands. But into the outback, unknown isolation we went in 1974 to 1975. My memories of this place are rich and vivid – through childish eyes this was a wondrous place where so many amazing things happened – dealing with snakes at midnight, defending against a plague of rats, rowing through flood waters, being rained on by fish, travelling 100km to go to the movies, doing my schooling by radio, flying the flying doctor’s plane when I was being evaced to Alice Springs (was I really unwell? the passengers were after I finished flying), walking what I thought was miles to see my friend Frank the cook at the station (1km – in reality), hanging out with Daisy and the other kids at the trackers house all of this and more. So to return 41 years later was truly a moving moment in our journey. I had been warned by my father and Alan Hogan the police officer who took over after us that the place was now a ruin as the police station was closed in 1979 38 years ago. All that is left standing are a few remnants of what was the police precint – the gaol, trackers quarters, windmill, chicken pen and goat pen. Standing there where once stood a house and police station is now only spinefex, bushes – there is very little evidence  buidlings once inhabitied this place – but for coloured concrete, broken glass and what appears to be fragmented linoleum. Even so just being there brought back recollections – of a time that will never be seen or expereinced in our now modern, technical world. A world where the little things mattered – getting a letter from your school teacher, eating hot Anzac Cookies with your brest freind Frank the cook, singing siblantly around the campfire with ringers, going on adventures with your siblings where you roamed the empty  countryside barefoot and free.

To be able to visit again was magic – so even though our pictures are of delapadated buildings and nothingness – I hope you get a little sense of what life was like.

Getting to Anthony Lagoon – was an adventure in itself – we knew the property was only able to be accessed by a dirt road and it had been raining!! So with in trepidation we took Red out onto the dirt. All went well and even though red got a little!! muddy she is okay.
We wouldn’t have been able to visit without the hospitality of Cassie and Anthony Cox, Managers of the Anthony Lagoon – thanks for letting us come out and wander about. 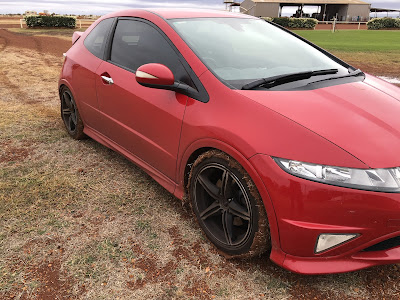