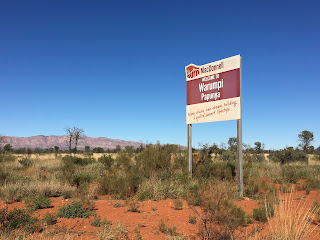 In 1972 my father was posted to Papunya, an aboriginal community 240kms west of Alice Springs. This community was established by the government of the time to house the increasing number of displaced peoples who were no longer able to live their nomadic life of hunting and gathering due to the increasing push of cattlemen into their traditional lands. When our little family arrived there were over 1000 aboriginal people living in Papunya.  Dad and another police officer, Kennedy, were the only officers in an area that went as west as Kintore and East past Derwent station.

Being only 5 at the time of our arrival in Papunya my memories are little more than glimpses of events than full-blown recollections. Visiting Papunya for me was about pushing open those windows to see if I could remember things more clearly and I thought that just being there, standing on the red dirt would somehow tap into my hippocampus and let things out.

You can’t just go and visit Papunya as it is a restricted community so that was our first challenge – how could we get permission to go out and take a look? I emailed the principal of the Papunya school, Theo, and told him a little of our story and our reason for coming out to visit and if there would be a way he could assist us to achieve this goal. I still have never met Theo but within five minutes of me sending the email I received a phone call from Beth Turner who graciously invited us to stay with her family and offered to be our tour guide.

Driving out past the ever changing colours of the West Mc Donnell Ranges is something we recommend. We left Red behind as the road out is mainly dirt and hired a ubiquitous white Toyota Prada. Arriving just after lunch we realised that we didn’t know where Brian and Beth, our hosts for the week-end, lived!!! We headed to the centre of the community and the petrol station – got out of our car and asked the gentlemen serving at the bowser if he knew Brian Turner and he replied he did as that was him.

So began a blessed week-end of making connections with people from the present and past. 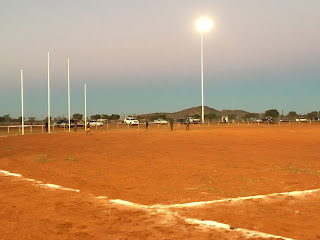 Coincidently, when we arrived many others were arriving from all over the area as the different aboriginal groups were coming together for a massive AFL tournament – which would last for nearly a week. The field was dirt and the markings on the field were made with lime. We took the opportunity to watch a number of games  –  the play was fast and frenetic.  We had been warned that play may turn nasty and that fights were likely to break out between teams and spectators – these concerns were backed by the number of police officers we saw in attendance. Normally in Papunya have three serving officers but today there were at least 10 on site.  But while we were there all remained calm. The game was interesting we – the off loads between players were so fast we didn’t see one player being tackled as you would normally in an AFL game.

We were given the opportunity to meet Sergeant Dan, the police officer in charge, and he gave us a tour of the police station. The house that we lived in is still there and one of the constables now calls the house home. We only got a brief glimpse of the house through a chain link fence as the police homes are now encased in 6ft fences. When we lived in Papunya we had no fences and if there were any problems in the camp people would come and knock on our front door looking for the on-duty police officer.

On Saturday night we were invited to a Christian sing-along – even though we were tired we decided to go along and listen to the singing. I am so glad we decided to go as we met Linda and Amos Anderson there who, once we got chatting, it was revealed that we would have been classmates at the school. The doors in my mind sprang open and memories came bouncing back. Together we reminisced about our school teacher Audrey Attwood and her pure white thongs that she miraculously kept clean in the red dirt, the floods and how food was dropped out of planes onto the oval, sitting on the verandah writing our letters on slate and swimming in the local dam. 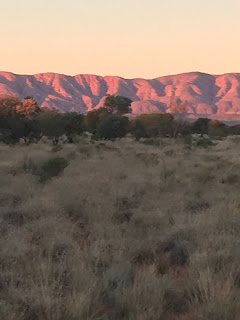 hues of purple and pink light up the West McDonnell Ranges. Later we said good-bye to our hosts and family.  It was a journey well off the beaten track but one we are glad we took.