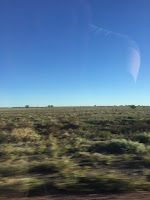 Another unknown fact is that in Winton depending on where you live will depend on what type of water system you need – cooling or heating. If you live in the East near the bores where water, rich in minerals including sulphate, is pumped out of the ground at steaming temperatures then you will need a cooling system but if you live on the other side of town you will need a hot water system. We stayed at the Banjo Holiday units on the east side of town – where the water is hot and full of nutrients – a little like Rotorua Michael reflected.

Winton is a flat isolated town in north western QLD. When we told people we were staying there for two nights they questioned why. For us it was simple. Michael was enticed to attend Vision Splendid – to sit out under the stars and watch a movie. Due to my work commitments we could only attend the final night of the festival – so Mike booked us in for the Short Film Competition.

Arriving into Winton on Friday afternoon we were greeted by our host, Stewart, at the Banjo Holiday
Apartments. He gave us great advice – if you want good food try the Winton Hotel – “I have never had anyone give me a bad report on their food.” As the town is planned on a simple cross hatch design it was easy to walk to the Winton Hotel for dinner. Stewar
t did not disappoint – the food was rich in flavour, portion size and when they say steak, chips and gravy they didn’t skimp on the gravy. Mike enjoyed fish and veggies – there were carrots, greens and lashings of mashed potato.

Winton is famous for the Australian Age of Dinosaur centre – a centre funded by a combination of local govt, sponsorships and some limited funds from state and federal govt. Being creationists you sometimes armour yourself before entering an establishment that you know is going to speak in millions of years and evolutionary terms. But this was not really the case. The tour at the centre is a journey through Australian hard work and perseverance.

The Elliot family, a third generation sheep farming family, were the ones to make the first discovery in the 90’s and it is by their sheer determination and local knowledge that we now have the centre and a local and national community of volunteers who work together to bring to life these magnificent creatures. The tour takes you through the working lab – where you see how the artefacts are found, cared for and prepped by volunteers under the guide of the real palaeontologists. 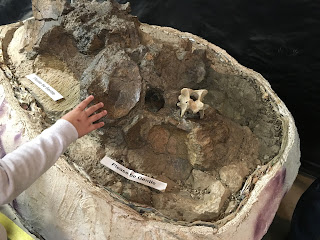 We met Rose who has completed a 10 day dinosaur prep course so that she can come out from the Gold Coast for 2 – 3 weeks at a time to prep and ready dinosaur bones that can then be put together like a gigantic 3D puzzle to form a dinosaur. Without the dedication of the
volunteers the bones would remain wrapped in their dinosaur jackets of alfoil, newspaper and Plaster of Paris. They wrap the fossils in these jackets to protect them until the can get to them. The volunteers then chip away the rock (usually sandstone) to get to the fossil underneath – a painstaking process. 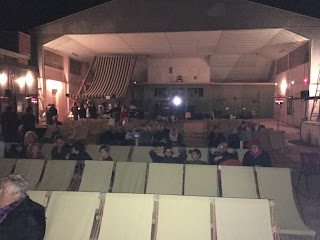 Task – grab a bunch of film students from three uni’s on the east coast. Put them together in tents in the middle of the outback and tell them they have a week to make a short film – that will be shown to the public at the end of the Vision Splendid Outback Film Festival. What did we get – three amazing, diverse but good cracking yarns. When Mike told me we were going to the film festival and we would be sitting on deck chairs out under the stars watching movies – I interpreted that to mean we would be seeing some old classics like “Breakfast at Tiffany’s” or “Casablanca” – not viewing films made by the up-and-coming film makers in Australia. The night was a hoot – we all waited expectantly at the glass doors of what in the day time is a little café – we were told to rug up – so I had on my thermals, Kathmandu parker, woolly socks and hiking boots – whereas Mike in classic Mike way was wearing a sci-fi t-shirt, jacket and over his arm his Kathmandu parker. Next to us were people who looked more like yetis – scarves, beanies, coats, blankets, pillows.

Doors opened and we scampered in – trying to not push in but wanting to get the best deck chair in the house. We settled down in the second row – Mike bought the obligatory $4 a box popcorn and a packet of Jaffas $2. The night began with a welcome and explanation on how the night would proceed – Greg Dolgopolov, a film teacher from UNSW, gave us the low down. If the film makers were in the house they would come out before their film and introduce it to the audience, we the audience were to watch all the films and then at the end we would vote for the people’s choice award by throwing paper planes at the front and the film that had the most paper planes thrown won. The first film had been made by the Vision Splendid kid’s Club and they had made a 20 second stop motion film about dinosaurs. To add to the drama they gave the film live action narration while it was being shown.

Other films of the night were; a documentary made about Steph, an 81 year old resident of Winton, who was one of the busiest ladies in town plus liking Judas Priest and Black Sabbath; a winsome film about Ethel a 10 year old girl looking for her mother – recently shown at Cannes. But the highlight was the films made by the intrepid film students who were given the task of a week to make a film. With ingenuity they had resourced cast members, locations and sets from the townsfolk of Winton. The winner of the night was Kim Kimura director of “Warranty” – a heart-warming film which starred Peter Evert a local octogenarian. Kim dedicated the film to his grandpa and family. “Roy”, a film which had been filmed in less than a day and starring Roy Billings the patron of the festival, had everyone in tears of laughter – it took the mickey out of celebrities and stardom as only an Aussie film can do. It also highlighted how gracious Roy was to volunteer and be involved in a small production that was designed to take the mickey out him. Like the Australian Age of Dinosaur centre this festival is run primarily by volunteers and sponsored by the local Winton community.

So next year if you are looking for something to do – you could always set you self the task of going out west to help prep Dinosaur bones or be an extra hand at the Vision Splendid Outback film Festival. I know that it has sparked our interest.